These well-known paintings, close to Toghwana Dam, in Zimbabwe’s Matobo National Park, are important in understanding mysterious paintings that have long puzzled researchers – the so-called ‘formlings’. These are large, segmented, organic-looking shapes, different in their details, but still recognisable as the same basic thing. They are painted at hundreds of rock art sites, mostly in Zimbabwe, but also in Limpopo Province in South Africa and, possibly, in Namibia too. What‘s striking about the Toghwana Dam paintings is that they show a human figure interacting with a ‘formling’ in a very purposeful manner. A figure – with tasselled hair and what may be a porcupine quill in its hair – kneels on one leg and holds an object in right hand towards the ‘formling’. Three sets of dashed lines seem to enter or exit the ‘formling’.
What is being shown here? One explanation is that the figure is smoking out a bees’ nest. The object in its hand is a torch of smouldering plant material whose smoke will confuse and stupefy the bees. The ‘formling’ is a bees’ nest with red honeycombs inside, and the three dotted lines depict the flight paths of bees. Not surprisingly, variations of this composition are very popular with beekeepers – they use it on their labels – as you can see on this bottle that I took to Zimbabwe!
An alternative interpretation is that the ‘formling’ is a termites’ nest and that the dotted lines are winged termites leaving the nest. These creatures are a delicious food, sweet and nutty, and very nutritious. Kalahari San people apparently watch the entrances of termite nests and may close them with a grass plug in order for large numbers of winged termites to build up at the exit from the nest. Then they remove the plug and are able to gather large quantities very efficiently. The Toghwana Dam paintings may therefore show somebody who is controlling the flow of the winged termites.
How does one decide which explanation is right? After all, the artists themselves are dead, so there can be no final proof from them. But then that’s the point of research – to construct explanations for things (like rock art) that puzzle us. And in the absence of final proof, explanations cannot be ‘right’ or ‘wrong’ – rather, they compete with each other – one explanation strives to be better than another.
So which explanation (if any) is best? To find out we need to look at more examples of ‘formlings’ at other rock art sites, to see if there are ‘patterns’ in the way they are depicted and associated with other images. In future posts I’ll show how ‘formlings’ are painted in more complex painted panels that include serpents, a menagerie of animals, fish and plants. 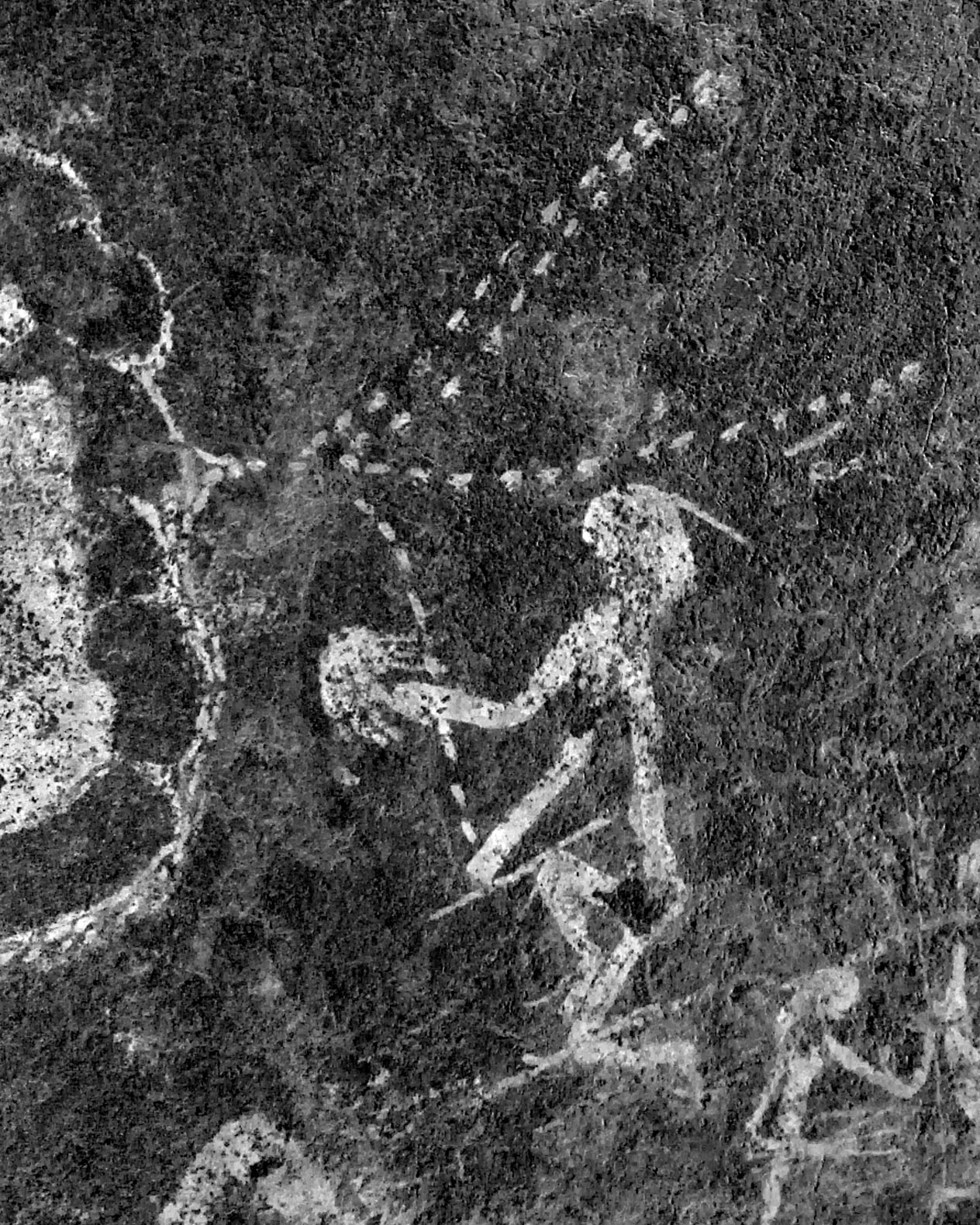 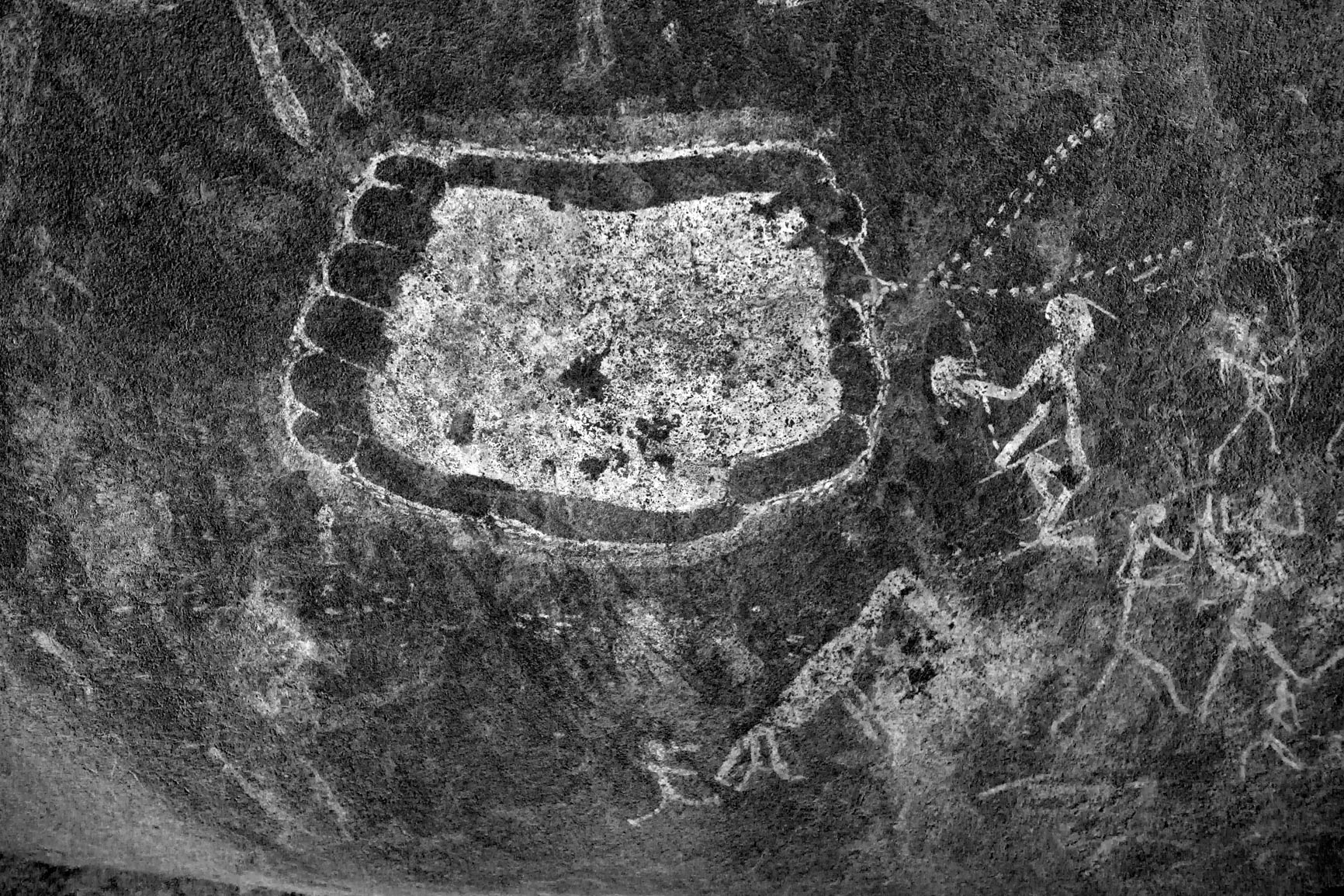 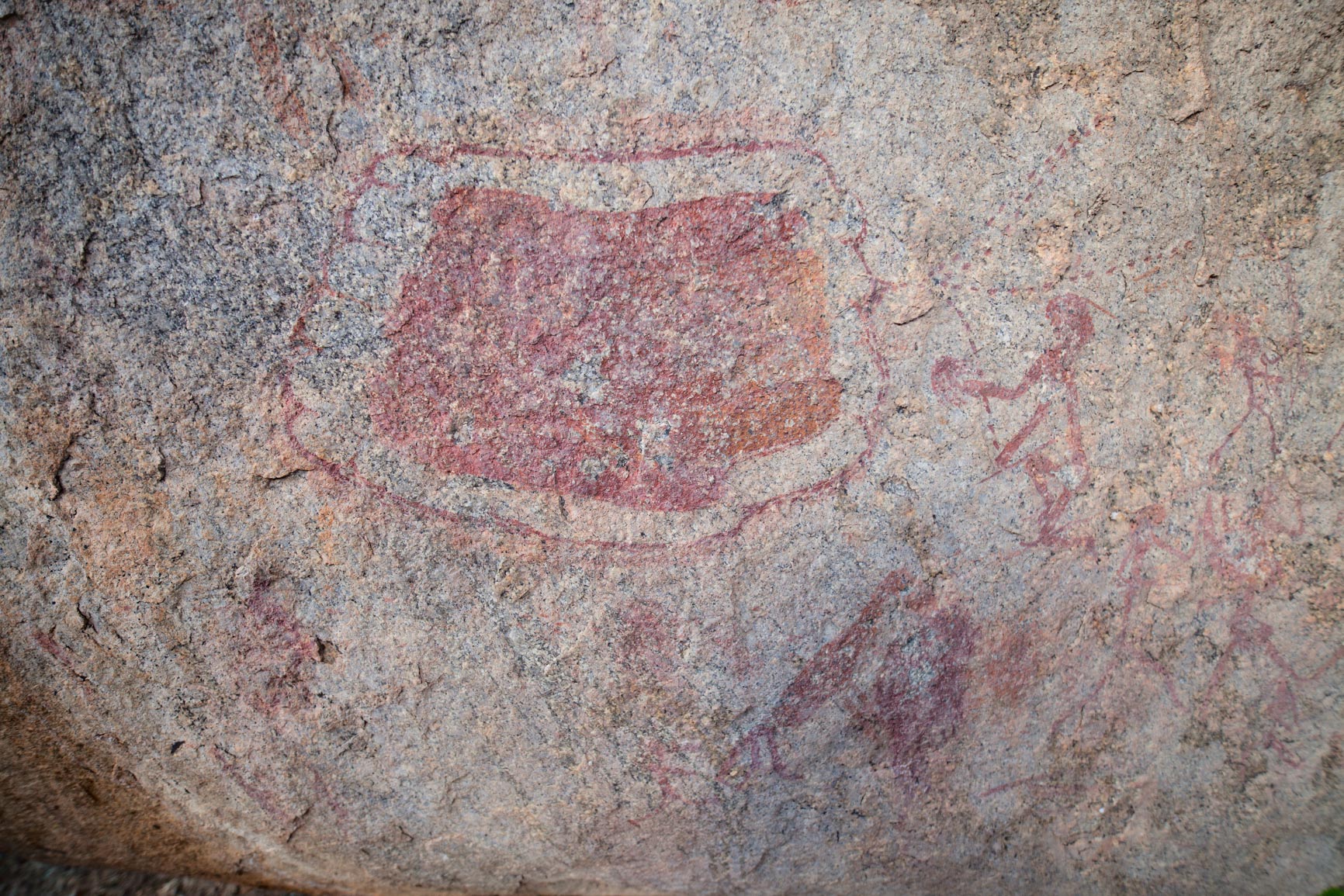 You can see that the label designer made a few changes, perhaps to avoid copyright infringement — not of the original painting, but of a copy made by Harald Pager many years ago. So this one has a bow at its feet and it’s holding the ‘torch’ away from the nest, not towards it. And the ‘streams’ of bees have been altered too. For the record, it was very good honey!

It’s really hard, if not impossible, to tell whether these lines of dashes are supposed to be ‘bees’ or ‘winged termites’. They are not detailed enough to identify I think…